Shenzhen Airlines has introduced 16 robots to serve in passenger lounges.

The robots, named “Zunpeng Xiaobao” are able to directly interact with passengers.

Shenzhen Airlines hopes to improve the passenger experience as the robots can provide consultations, guidance and entertainment.

Details are a bit limited but the robots can reportedly talk, dance, tell stories and play music.

People’s Daily Online reports that a woman, Ms Liu,  flying from Shenzhen to Xi’an asked one of the robots, “Do you have a place to store luggage?”

“We have fingerprint identification luggage storage cabinets, come with me,” the device responded.

Called AnBot, the robot carries out security checks in the departure hall of Terminal 3. 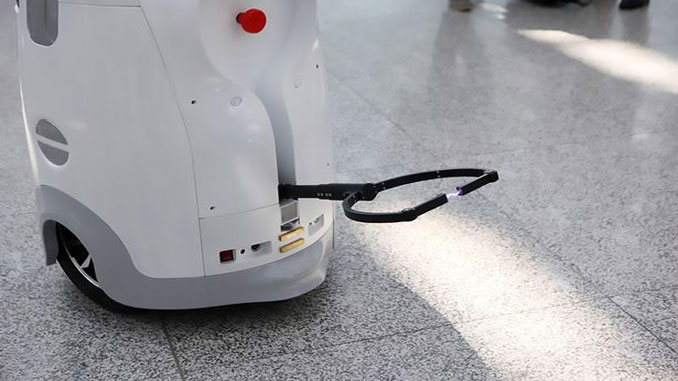 AnBot has the ability to disarm people with its electric prod, which is actually activated remotely by a human.

Our favourites remain AnBot at Shenzhen Airport with the cattle prod and the Sheldon Cooper lookalike at Indianapolis.

Shenzhen Airlines is the fourth largest domestic carrier in the Chinese market with around 7% of seat capacity and flights.

Passenger numbers:  In 2010, the airline carried 16.5 million passengers, up 9% on the previous year.