JetBlue is to run a trial of self-boarding using facial recognition on flights between Boston and Aruba starting on 12 June.

The airline is working with the U.S. Customs and Border Protection (CBP) to test a new biometric self-boarding process as part of ongoing trials to implement a biometric exit process in the future.

JetBlue will be the first airline to integrate with CBP to use biometrics and facial recognition technology to verify passengers at the gate during boarding. 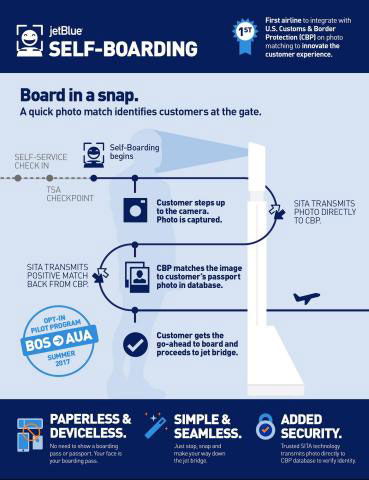 Removing the passport from the process speeds it up and means the camera area takes up less space than traditional egates.

SITA will supply the technology to capture the facial biometric, integration with the CBP database and JetBlue’s departure control system.

JetBlue will issue iPad minis to staff, so that they can help passengers. Probably with things like the seat number as the boarding pass will likely be stuffed in a pocket or worse.

Aim of the test

The aim of the test is to show how technology can make the boarding process simple for the passenger while enhancing U.S. national security through the implementation of biometric exit.

Last year, CBP ran a test at Hartsfield-Jackson Atlanta International Airport on one daily Delta flight to Japan in which a facial image is captured and compared to a database without first reading the passengers passport.

Over 28,000 people took part and the percentage of passengers successfully identified was in the high nineties.

The obvious concern is who will have access to the pictures and for how long. JetBlue, SITA?

At the gate, passengers board only through facial recognition. No boarding pass or passport is needed. But, passengers have to register their details before using the biometric boarding gate. Registration involves scanning the passport, the boarding pass, and the passenger’s face.