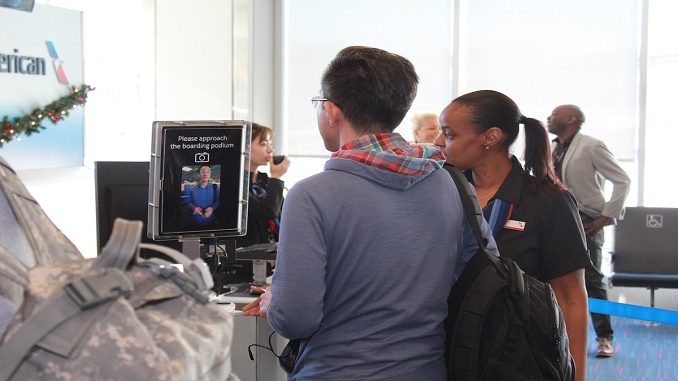 Instead of scanning boarding passes, the new one-step facial recognition program will scan and verify a passenger’s identity with U.S. Customs and Border Protection (CBP) in seconds at the gate.

When passengers begin the boarding process, the facial recognition program will scan an image of their face and send it to an existing cloud-based CBP database.

The system then matches the image against the passport photo already on file with CBP and sends back a yes or no determination on whether they are cleared to board within seconds at the gate.

Agents will continue to ensure passengers have their passports with them before departing.

American says that passengers may also choose not to use the new system and board with their regular boarding pass.

The pilot program will be used at LAX for 90 days as American evaluates its potential expansion to more flights and locations throughout its global network.

“LAX is American’s gateway to the Asia-Pacific region, making it the perfect location for American to launch biometric boarding.

“The goal of the new technology is to provide a more efficient, modern experience for our customers and team members while enhancing aviation security. That is exactly what we’ve been working to do here in Los Angeles.”

In December 2017, British Airways started to trial self-service biometric boarding at LAX for international flights out of the USA.