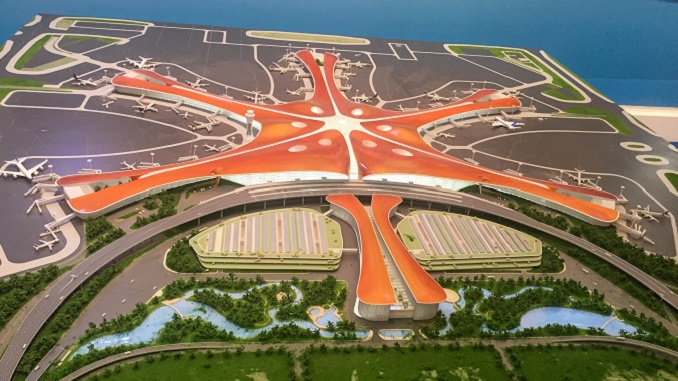 The new airport will use a variety of self-service and other modern technologies, including self-service check-in, self bag drop and RFID for baggage tracking.

Over 80 percent of check-in will be self-service and over 70 percent of bags are expected via self bag drops.

Using RFID technology for baggage tracking means that passengers can track their baggage in real time using an app.

Civil Aviation Administration of China (CAAC) says that passengers can enjoy a completely paperless, self-service boarding experience, from entry into the terminal building to the boarding gate. It doesn’t go into detail but that will be achieved by tracking passengers at all these points using facial recognition.

The new airport is located in southern Beijing, 46 kms from the city. It is designed to take pressure off the overcrowded Beijing Capital International Airport. In 2017, more than 95 million passengers passed through Beijing Capital, the world’s second busiest airport behind only Hartsfield-Jackson Atlanta.

Beijing Daxing will have seven runways and is expected to handle 45 million passengers annually by 2021 and 72 million by 2025.

It is scheduled to start commercial operations on Sept 30.

China Eastern and China Southern Airlines will transfer most of their Beijing routes to the new airport in the coming years. Xiamen Air will move all of its flights to Daxing Airport next March.

Stretching 41.4 kilometers, the new self-driving trains can run at a speed of 160 km per hour, with as many as 448 passengers.

The line is part of an integrated transport network that will combine subways, expressways, intercity rail and high-speed rail with the airport at the center.

1 week ago
Air Italy, the country’s second largest carrier has stopped operating. The airline appears to be closing because of mounting losses. Previously called Meridiana, it started operating... Read More

4 weeks ago
Airport is in a mission to re-home adorable pooches... Read More