Air Astana, the award-winning flag carrier of Kazakhstan, is introducing an Economy Sleeper Class product on its Boeing 757. 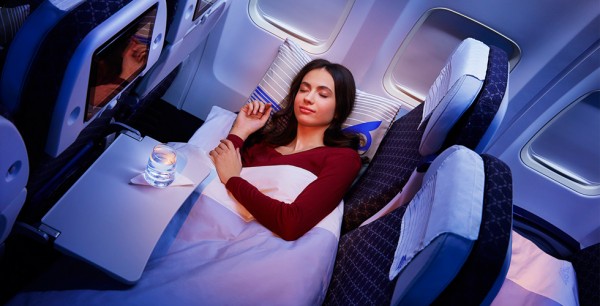 The Economy Sleeper Class cabin is completely separate from Business and Economy Class cabins, with up to 12 seats available on each flight.

“As part of the constant process of product and service innovation, Air Astana is delighted to introduce the new Economy Class Sleeper product, which provides many of the comforts and amenities of Business Class, but is attractively priced at the equivalent full economy class fare,” said Richard Ledger, Air Astana Vice President Worldwide Sales. “I’m confident that discerning passengers flying from Astana to European destinations will enjoy this class of travel, whilst experiencing Skytrax 4 Star award winning levels of service.”

Services from Astana to London Heathrow and Frankfurt start on 3rd February 2015, with Paris to be added on 29th March 2015.

Air Astana commenced regular flight operations on 15th May 2002 and currently operates a network of 60 international and domestic routes from hubs in Astana, Almaty and Atyrau. The airline operates a fleet of 30 Boeing 767-300ER, Boeing 757-200, Airbus A320 Family and Embraer 190 aircraft, with an average age of 5.5 years.

Air Astana was the first carrier within CIS and Eastern Europe to receive a 4 star rating from Skytrax and also named Best Airline in Central Asia and India for the past three years.

Air Astana is a joint venture between Kazakhstan’s national wealth fund Samruk Kazyna and BAE Systems, with respective shares of 51% and 49%.

Air France gets its tenth and last Boeing 787-9