A major new coalition has been launched to fight the proposed 3rd runway at Heathrow.

The coalition, which has only just been established, is formally backed by 18 local campaign groups, including Stop Heathrow Expansion, HACAN, Teddington Action Group and recently formed BASH Runway 3 (based in Brentford). More groups are expected to join in the coming weeks. The coalition also has the support of five local authorities as well as leading politicians from all the major parties.

The No Third Runway Coalition has been formed to put additional pressure on the Government to drop plans for a new runway at Heathrow, building upon the work of existing opponents to the third runway including campaign groups, local authorities and MPs.

The work of the coalition will include highlighting issues with the Department for Transport’s consultation on Heathrow expansion. The consultation, which runs until 25 May 2017, has seen 20 local exhibition events across west London, Berkshire and Surrey.

However, considerable numbers of residents were left disappointed upon attending the exhibition find that information on where new flight paths will be will not be presented until much later in the process.

“The formation of this new powerful coalition is a breakthrough moment for the campaign against a third runway. As more information comes out about air pollution, the environmental threat and the costs of the runway the debate is beginning to shift significantly against Heathrow expansion. This new initiative has my 100% support.”

“This is the biggest coalition of opponents to Heathrow’s reckless expansion yet seen. Bringing together experts, residents and politicians of all parties shows we mean business and are in it for the long haul. We are determined to stop the new runway and the blight it will bring to millions of lives.”

“The coalition is critical in this period of consultations: all communities need to know the flight paths of a proposed Heathrow third runway; every community affected is concerned about the increase in noise and air pollution and the financial costs for all taxpayers.”

“I am delighted to be part of this cross-party coalition, working together to oppose a third runway at Heathrow. Working together will give us greater resources to challenge the myths and misinformation that the public are being fed by Heathrow and the Department for Transport on the supposed benefits of Heathrow expansion.”

“The threat of Heathrow expansion has brought together people from across the flight paths and beyond, with new local campaign groups forming all the time. The No Third Runway coalition will give them all a platform, allow them to work more effectively together and provide support for everyone from MPs to the heroic local Councils who are challenging Heathrow in our courts.”

“The case against Heathrow expansion has never been stronger. It won’t happen.” 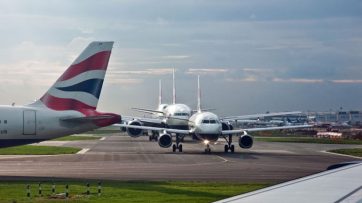 First legal challenge to Heathrow runway set to take off