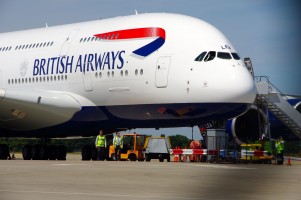 On Monday 15 July 2013, the first of British Airways new A380s flew into Manston airport in Kent where it will be based for further trials and crew training.

British Airways managed to fly the huge aircraft into one of the often proposed LHR alternatives exactly as the Mayor of London sets out the three possible locations for a new hub airport.

None of them is Manston.

Manston airport is located in south east Kent, close to the seaside towns of Ramsgate, Margate & Broadstairs, and was originally an RAF base.

The long runway and relative lack of any other flights (KLM fly twice daiy to Amsterdam), together with its relative proximity to London, convinced British Airways that Manston was the ideal destination to base the aircraft for final testing and crew training.

The carrier, which is spending £10bn to upgrade its long-haul fleet, is the first airline in the UK to take delivery of the A380 superjumbo.

Singapore Airlines was the first carrier to operate an A380, with its first flight taking place in October 2007.

Virgin Atlantic is due to take the first of the six A380s it has ordered in 2018.