Southwest Airlines (WN) is upgrading its inflight entertainment by offering free live TV that passengers can watch on their own WiFi-enabled devices.

Passengers with devices running Apple’s iOS and Google’s Android will have free access to 14 live TV channels and up to 75 on-demand TV shows free, available on 427, or 60%, of the carrier’s fleet. TV stations include Bravo, CNBC, FOX News Channel, MSNBC and the Golf Channel, among others. Previously, the service cost $5. 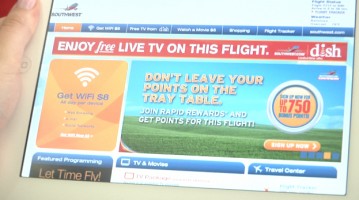 Southwest will continue to charge fliers $8 a day for Wi-Fi Internet access and for entertainment outside the Dish offerings, such as $5 movies. Passengers will see both the live-television and Internet options when they sign in.

Southwest unveiled the deal by bringing the Dish spokesmen known as the “Boston Guys” onto a Southwest flight, where they gave all 130 passengers an iPad 2 on which they could try out Dish’s on-demand content

Dish will use the deal to offer 12,500 Southwest frequent-flier points to new customers who sign up for certain home programming. The companies said they were joining together in a nationwide marketing campaign.

The service will be powered by Row 44, a provider of satellite-based in-flight Wi-Fi. Row 44 first launched live TV on Southwest in the summer of 2012.

JetBlue Airways and Virgin America have offered free live TV for years, but they have done so on seat-back screens.