The completion of the final segment of DART’s Orange Line to DFW Airport not only marks a major milestone for the Airport and DART, it also opens a new era of connectivity for customers and Airport employees.

Once inside Terminal A, customers can easily access American Airlines ticketing and baggage check, TSA security checkpoints and DFW’s Skylink people mover system (inside of the secured area) to connect to any of DFW’s five terminals. Customers of other airlines with carry-on baggage can use a multi-airline kiosk in the elevator vestibule at Terminal A to check in for their flight. Passengers with baggage to check on other airlines can hop on DFW’s Terminal Link shuttle buses for an easy transfer to their desired terminal.

“This is a momentous day for our customers and for DFW Airport, because passenger rail is a critical component to DFW’s status as a top-tier international gateway,” said Sean Donohue, CEO of DFW Airport. “With the DART Orange Line connecting DFW to downtown Dallas, DFW is now on a par with global hub airports that have integrated rail, which is a major selling point for customers and conventions.”

“By adding five miles of rail to what was already the longest light rail system in North America, DART is connecting Dallas to the world through DFW Airport,” said Gary Thomas, President/Executive Director of Dallas Area Rapid Transit. “We’re proud to link the world’s third-busiest airport and its 61 million passengers to our light rail system, which offers convenient and economical public transit to Dallas and the 12 additional cities in the DART Service Area.”

DFW Airport also serves as one of the region’s major employment centers, which means the rail connection provides a convenient and cost-effective way to commute for the nearly 60,000 people who work at DFW. 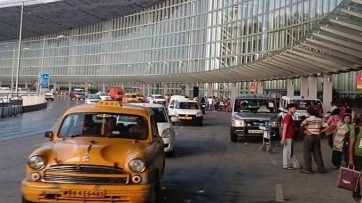 Book Uber and Ola from kiosks at five Indian airports

LAX is largest US airport to allow Uber and Lyft