Airlines are marking International Women’s Day by operating flights with all women crew.

Air India, Jet Airways, Ethiopian Airlines and Jet2 are operating flights totally staffed by women – on the ground and in the air.

The flight AI 173 departed from Delhi on March 6th and landed in San Francisco after flying almost 17 hours and covering a distance of around 14,500 km.

Air India will also operate 20 domestic flights that will have women pilots, cabin crew and staffers.

Similarly, the airline’s evening flights from Delhi to Mumbai 9W361 / 9W362 will be serviced by an all women cockpit and cabin crew.

Every aspect of the flights was managed by an all-women crew including engineering, ground handling, cargo, ramp and airport services.

The technical services were attended by women aircraft engineers, technicians and flight dispatchers; while the non-technical work on the ground was handled by women duty managers, counter staff, security officers, and cargo personnel.

Nearly 35 per cent of Jet Airways’ workforce are women.

Women will operate all aspects of the flight, on the ground and in the air.

Ethiopian Airlines has around 3,000 women employees, about 30% percent of its total workforce.

Jet2.com will today mark International Women’s Day with a flight operated entirely by female staff, both in the air and on the ground.

The 16.30 Leeds-Bradford to Amsterdam flight will be checked-in, loaded, boarded, pushed back and crewed by 12 women. They include the captain, first officer and duty manager plus the cabin crew, ramp team, dispatcher and passenger service agents.

Five flights of the Lufthansa Group with 63 female and one male crew member will depart Frankfurt, Munich, Geneva, Vienna, and Brussels for New York. Lufthansa, SWISS, and Brussels Airlines flights will have women-only crews. 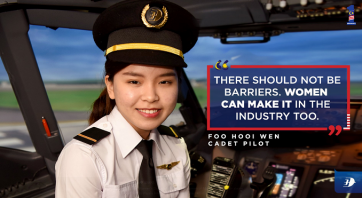