The ABC eGates offer a fast exit control process for departing passengers, taking only a few seconds to complete each transaction. At the eGates, passengers authenticate their passport and have a photo taken, to be matched to the one stored on the passport’s chip. Upon successful authentication, the passenger proceeds to security screening.

To help passengers use the new system, SXM has appointed ambassadors, who help eligible passengers to use the ABC eGates.The process is monitored by an Immigration officer who oversees all e-Gates from a separate booth.

The solution means that Immigration can process upwards of six passengers in the same time it would take one passenger to be cleared through traditional exit control.

“Our main goal is to introduce an integrated passenger experience programme that seamlessly streamlines the identification, verification, validation and enrolment processes in such a way that it positively enhances passenger flow, while maintaining the highest level of security for travellers.”

This is the second completed milestone of a comprehensive self-service program that SXM has planned across the whole airport, covering both arrivals and departures.

The ABC eGates are from Portuguese company Vision-Box. 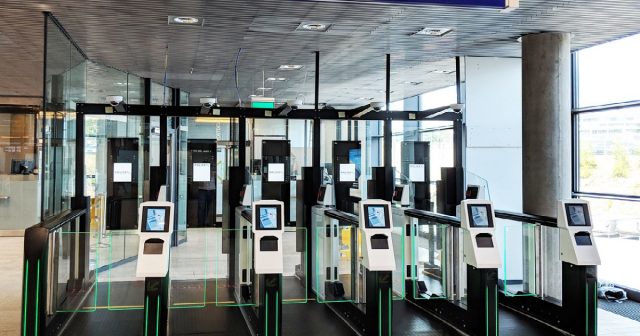