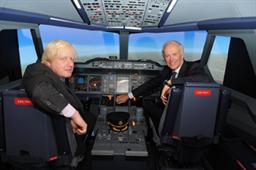 London’s latest visitor attraction, the Emirates Aviation Experience, was officially opened today by Mayor of London, Boris Johnson and Tim Clark, President of Emirates Airline, ahead of its public launch on 6th July.

The Emirates Aviation Experience,  which cost in excess of £4 million, will take visitors on an interactive journey into the world of flight. In a UK first, it will include four commercial flight simulators under one roof including two A380s and two 777 aircraft. Further attractions include a 3D hologram of the internal mechanisms of an aircraft, an HD video-wall and a full-size nose-cone and flight deck of an A380.

Located at the south side of the Emirates Air Line, it covers an area of almost 300 square metres and aims to provide an insight into the operations and modern achievements of commercial air travel.

The Emirates Air Line (also known as the Thames cable car) is a cable car link across the River Thames between the O2 Arena (known as the Dome) and the Royal Docks, home to Excel, the huge exhibition centre.

This is a potentially great new addition to London’s attractions, and we look forward to Emirates explaining why Emirates A380s are known as the most noisy aircraft at LHR.

Entrance to the Emirates Aviation Experience will be £3.00 for adults and £1.50 for children under the age of 12, making it one of the most affordable attractions in London.

The  launch comes as Emirates also unveils its new ‘Say hello to the wonder of flight’ advertising campaign to mark the official opening on the 6th July.