British Airways has welcomed one of its most frequent flyers on board a flight from Heathrow to Manchester – EJ the Golden Labrador.

The fully trained assistance dog, who travelled with his owner, Hounds for Heroes charity founder Allen Parton, notched up his 262nd flight when he flew north.

But he wasn’t the only canine customer on board the flight, next to him was fellow assistance dog Rookie, a Golden Retriever.

The two dogs, who were also accompanied by Hounds for Heroes head trainer Lexi Wyllie, were the stars of the Defence Medical Welfare Services’ (DMWS) Showcase Day at Wythenshawe Hospital in Manchester.

The showcase was designed to demonstrate the wide range of support available for veterans on a medical pathway, and this was the first time so many military organisations have been together in a hospital environment.

Hounds for Heroes showed how assistance dogs not only bring quality of life to their owners by helping them with everyday tasks like opening doors, picking up items, and getting money from ATMs, but also how they also bring companionship.

During the visit to Wythenshawe the team took time to meet patients from around the hospital, including the Pulmonary Oncology Unit, Dementia unit, Orthopaedics and the Starlight Children’s Paediatric ward. There they met some of the youngsters injured in the recent Manchester bombing. 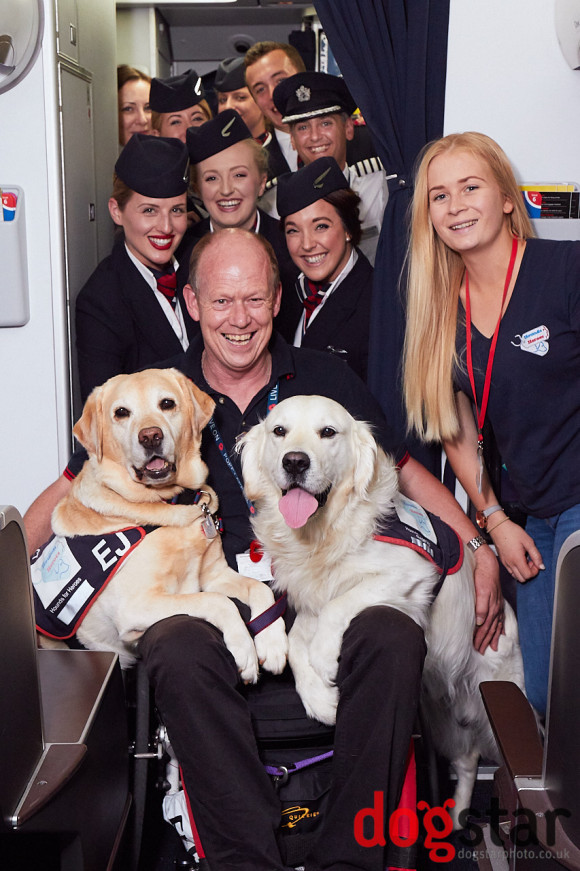 EJ (Endal Junior) is Allen’s own working assistance dog. His predecessor, Endal, was the first dog to fly in a British Airways aircraft cabin.

Endal saved Allen’s life after he was knocked from his wheelchair in a road traffic accident, by putting him in a recovery position and going for help. He was awarded the PDSA Gold Medal, the animal equivalent of the George Cross, for showing outstanding devotion to his duties.

Allen has since published a book ‘Endal’ in tribute to his companion who died in 2009. Before his death Endal was involved in mentoring and training EJ from a puppy.

The dogs EJ (left) and Rookie are pictured with Allen and Lexi being welcomed to Manchester Airport by customer service agents Rifhat Choudry and Rachel Foxley.

They are also pictured with the British Airways crew after arriving at Manchester.