Japan Airlines (JL) is starting a trial of iBeacon and smartwatches at Tokyo Haneda’s Domestic Terminal One.

The aim is to efficiently allocate frontline staff and to serve passengers faster.

Beacons are being installed at  each of JAL’s boarding gates at Haneda’s (HND) domestic terminal one. The beacons can show exactly where staff wearing the smartwatches are in the terminal and they can then be assigned to particular tasks as required.

The operation is controlled by management in a back office. They use the information to decide how to allocate the staff with the smartwatches and send alerts with the details to the smartwatch.

Frontline staff can also check and share the latest information related to their business activities by using the smartwatch.

iBeacon was introduced in 2013 is a transmitter that can notify nearby Bluetooth low-energy (BLE) devices of their presence.

The smartphones being used are the Samsung Galaxy S5 and Samsung Galaxy Gear 2. JAL also plans to test other latest smartwatches such as Android Wear™*4based LG G Watch*5.

JAL is working in with   Nomura Research Institute (NRI) on the project, which is due to start in mid August.

UK airline easyJet recently announced a trial of iBeacon technology and Virgin Atlantic has been trialing it in the Upper Class Wing at Heathrow Terminal 3.

American Airlines is involved in the industry’s biggest deployment at Dallas/Fort Worth International Airport. 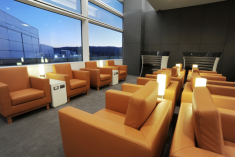