Lohegaon Airport, near Pune, in India has got its first self check-in kiosk 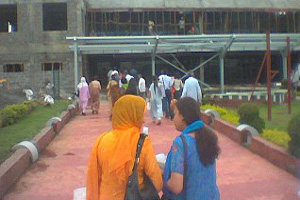 Passengers flying out of Lohegaon Airport with minimal baggage now have a reason to smile as they don’t need to stand in a queue any more. The airport has got its first self check-in kiosk.

Union Minister for Environment and Forests (EoMF) Prakash Javadekar inaugurated the facility at the airport.

Mr Javadekar said that the airport will need at least 4 to 5 such kiosks to meet the demands of over 1,500 passengers who use the airport daily.

“The check-in kiosk has become functional from today. It would prove helpful in saving time of the passengers as well as reducing the load on the other kiosks as there is considerable proportion of fliers who carry cabin baggage and will use the self check-in kiosk. Internationally, all the airports have this facility. We have now initiated it on pilot basis and will launch more kiosks in the future.”

Lohegaon also introduced a Wi-Fi service at the airport.

Departing and arriving passengers and airport staff will be able to use the high-speed wi-fi. The service is free for only 30 minutes.

The airport said that as many as 97 per cent of passengers carried at least one mobile device while flying.

“Today, internet has become as essential as water and electricity. 50 per cent passengers rely on the internet for real-time flight information. Providing the service at the airport is the beginning. We will begin similar services at several other public places in the city.”