The Richmond Heathrow Campaign has released a report that shows multiple flaws in the conclusions reached by the Airports Commission.

The Commission has recommended a third runway be built at Heathrow but the recommendation has been attacked by many parties, including The Mayor of London, MPs, councils, Gatwick and BA boss Willie Walsh.

The Airports Commission’s own data show a reduction of 17 million passengers for the UK as a whole, including business passengers and domestic passengers, as well as a reduction in flights and connectivity if the Heathrow option is chosen.

This flaw has been highlighted by The Mayor of London and Gatwick.

Passengers connecting from outside UK bring zero benefit to the UK

Over 50% of the new runway capacity would be used for an extra 22 million International to International transfers, providing little economic value to the UK as these passengers don’t step outside the airport.

The Commission says the investment of £17.6 billion would result in a net benefit of £1.4 billion (present value over 60 years).   This sum is negligible in macro-economic terms and within the margin for statistical error. And that’s ignoring the fact that the figure may be even smaller if full calculations for noise and air pollution and investment in transport to and from the airport, were to be included. 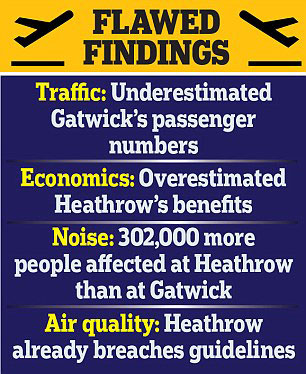 A third Heathrow runway would cost a basic £17 billion on Heathrow Airport plus a further £20 billion to improve surface transport access: the evidence shows it will not deliver what the Government wants.

The report doesn’t even cover all the problems of compliance with CO2, air pollution and noise targets.

All areas where Heathrow currently is in trouble and clearly will get worse with the massive increase in flights and surface traffic that a third runway means.

Costs for noise, air pollution and surface access are understated by at least £15 billion, which probably cannot be financed by Heathrow or the State and make the project undeliverable.

The report concludes that there is already significant spare capacity at almost all UK’s airports including Heathrow itself, which the Commission says has capacity to add another 34 million terminating passengers without any additional flights by using larger planes.

As Heathrow is far from full, there is no need for this costly new investment in one airport at the expense of others. Allowing the market to grow where it is needed is the right answer – no new runways.

The report from the Richmond Heathrow Campaign