Mrs May pledged to “fight to stop the third runway” at Heathrow and warned it would have a “detrimental” impact on her constituents.

The Telegraph has uncovered newsletters from Mrs May to her constituents that show her opposition to Heathrow as it would “increase noise and pollution”. 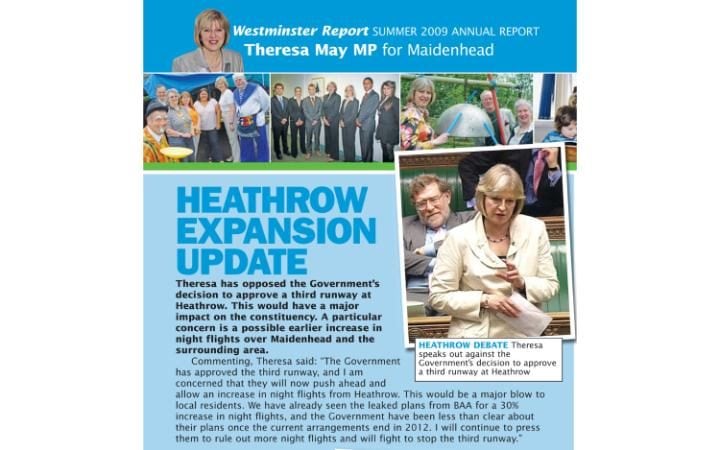 The Telegraph reports that a summer 2009 newsletter reads:

“Theresa has opposed the Government’s decision to approve a third runway at Heathrow.

“This would have a major impact on the constituency. A particular concern is a possible earlier increase in night flights over Maidenhead and the surrounding area.”

Mrs May is quoted as saying:

“The Government has approved the third runway, and I am concerned that they will now push ahead and allow an increase in night flights from Heathrow. This would be a major blow to local residents.

“We have already seen the leaked plans from BAA for a 30 per cent increase in night flights, and the Government have been less than clear about their plans once the current arrangements end in 2012. I will continue to press them to rule out more night flights and will fight to stop the third runway.”

The paper quotes another leaflet from November 2010 – months after the Tories won power and scrapped plans for the third runway – shows her, now the Home Secretary, praising the “victory”.

“Theresa has welcomed the news that the Government has cancelled the third runway project at Heathrow Airport.

“The third runway, which was planned by the previous Government, would have resulted in additional flights and increased noise and pollution in the Maidenhead and Twyford areas and surrounding parts, and was opposed by Theresa and much of the local community.”

“Like many local residents, I strongly welcome cancellation of the third runway at Heathrow.”

“Expanding Heathrow in this way would have had a detrimental effect on the Maidenhead and Twyford areas by increasing levels of noise and pollution, and the Government’s announcement is a victory for all those who have campaigned against it.”

HACAN also posts this link to Mrs May own website where she opposes Heathrow.

It has also emerged that she lobbied the independent airports commissioner while Home Secretary over concerns about the impact of expansion on the environment.

She was part of Mr Cameron’s front bench when he made opposition to a third runway a key part of his pitch to get the Tories elected in the 2010 general election.

David Cameron, said on 21 October 2009 in Richmond, that there would not be a third Heathrow runway, no ifs, no buts.

At that time he was soliciting voters in Richmond, a seat he had to win to become Prime Minister.

He did and he made Theresa May his Home Secretary. 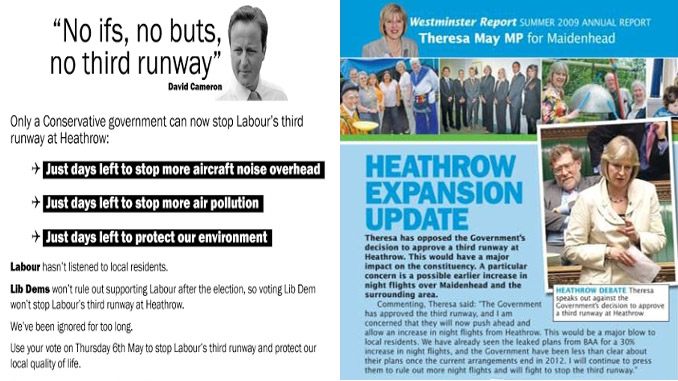