SAUDIA initially introduced the free Whatsapp plan onboard domestic flights on 5th May, and expanded it to include all international flights, on May 31st.

As of today, more than 500,000 passengers have logged on and experienced the free Whatsapp plan.

The airline is now expanding the plan to include – iMessage and Facebook Messenger.

SAUDIA passengers, in all classes, can access the social messaging plan onboard all flights enabled with WiFi connectivity.

Once the social messaging plan is selected, it will be available for the flight duration. 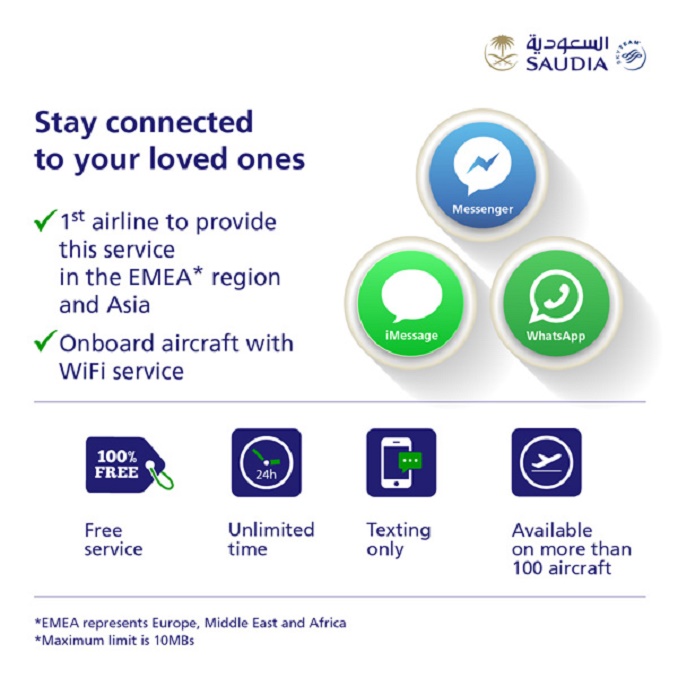 SAUDIA is the first airline in Europe, the Middle East, Africa and Asia regions to introduce a complimentary social media messaging plan onboard flights.

More than 100 aircraft in the airline’s fleet feature SAUDIA’s latest state-of-the-art inflight entertainment systems and features, including onboard WiFi and more than 4000 hours of Hollywood premiere and latest television shows, box sets, music, multi-language, international and children’s programming, as well as digital and audio books, and much more.

Routes: Saudia has a global network and currently operates to more than 90 destinations worldwide. It includes destinations in the Middle East, Turkey, Iran, India and Pakistan,  North African countries. It also flies to  an increasing number of airports in Europe and North America.

Fleet: At the time of writing, Saudi has 148 passenger aircraft, comprising: