British Airways will be the first airline in Europe to allow its customers to switch on their mobile phones and other handheld electronic devices after landing.

We all know that many passengers ignore all the warnings about the use of mobiles. There seems to be a race to who can switch on their mobile after landing to see who has the most new messages.

Previously, customers have been forced to wait until their aircraft has come to a complete stop and the doors were opened before they could use their iPads, Kindles, eReaders and mobile phones.

Once the aircraft has vacated the runway, cabin crew will make an announcement to customers to let them know they can use their handheld mobile devices.

But British Airways has now demonstrated to the Civil Aviation Authority (CAA) that their customers can safely use their handheld electronic devices, once their aircraft vacates the runway*.

The approach by British Airways to the CAA was made in response to feedback from the airline’s customers.

Earlier this year, British Airways was the first UK airline to allow customers on long-haul services to watch in-flight entertainment from the moment they board the aircraft to the time it arrives at its destination, following consultation with the CAA.

Ian Pringle, British Airways’ flight training manager, said: “Customers will no longer have the frustration of having to wait until their plane has arrived at the terminal building before being able to use their mobile phones and other handheld electronic devices.

“Now they’ll have that extra time to phone ahead for that important business meeting, check their emails, or make sure someone is there to meet them at the airport.”

British Airways customers will be able to take advantage of the change in policy from July 1, 2013. It will apply to every British Airways flight landing around the world, not just in the UK and Europe.

Customers on departing flights will still need to turn off all their handheld electronic devices when the aircraft leaves the gate, in line with current regulations. 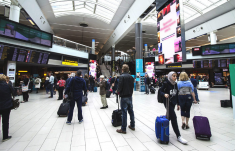