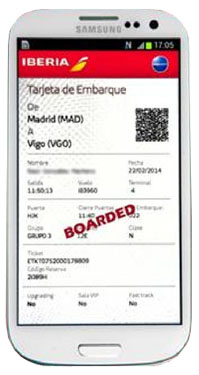 Iberia has announced a partnership with Samsung to introduce near field communications (NFC) technology in different stages of airport check-in and boarding.

Under the agreement, Iberia customers will be able to use a Samsung NFC-enabled smartphone to pass through the airport’s security control and boarding gates, even when the device is switched off.

To use the service, customers will need to click on the option to have the boarding pass sent to the smartphone’s NFC card when checking in online for a flight, and will then simply have to hold the device near the NFC readers to pass through security and board the plane.

The companies emphasise that the stored data is safe from intrusion because the smartphone must be held no more than 14 centimetres from the reader in order to be read.

The same NFC boarding pass can be used to automatically download information from other airport areas, such as VIP lounges or Iberia’s Quick Service Points. The technology can also speed up baggage drop when bagtag information is stored on the NFC pass.

According to the companies, the process is faster and more efficient than bar-code readers, and will result in a significant improvement in the travel experience of passengers.

The services will be activated shortly at airports equipped with NFC readers, said Iberia.